Most homeowners don’t think too much about their fuse boxes until they want to install an outlet, ceiling fan, or light fixture, or one of the fuses blows. While it’s good to have your fuse box checked out by a licensed electrician once in a while, it’s also good to have a working knowledge of just how the thing does its job. You don’t need to know how to wire a fuse box to understand the basics of how it works. Besides, getting to know your fuse box might save you some money down the road. And it’s always smart to sort your circuits so you’ll know what breaker switch controls what.

First, remember that even though people still call it a fuse box, yours probably isn’t. If your home was built after 1961, it’s very likely that you have a circuit breaker panel and not a fuse box. Circuit breakers came into use because they were safer than fuses. Breakers trip open circuits faster during a circuit fault and can be reset with the flip of a switch. Fuses take time to heat up and blow, and when that happens, you have to purchase and install replacements. You can probably find a fuse box in an older home, but it really should be replaced with a circuit breaker panel for safety’s sake.

With that said, we’ll cover circuit breaker panels by answering the two big basic questions many homeowners ask: “Why three wires?” and “What is the ground?”

Why Are There Three Wires Coming Into My House?

Some people see the three wires coming from the electric pole to the electric meter on the side of their house and think they represent positive, negative, and ground. 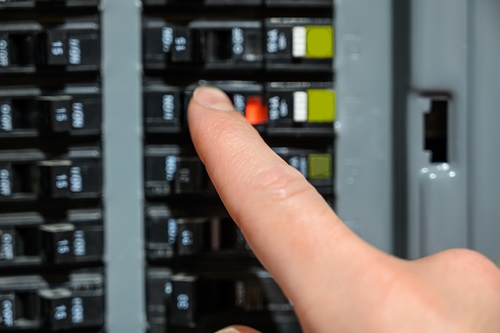 In North America, these wires are actually two 110-120 volt AC power mains and one neutral line. These wires connect in the electric meter and then extend inside your home via a connecting wire to fuse box or circuit breaker equipment. The neutral wire is connected to the neutral/ground bus bar. It is also connected by a metal clamp to your pipes and/or a copper-plated steel rod outside that is driven 8-10 feet into the ground.

Meanwhile, the two 120-volt mains are attached to their own circuit breaker (for example, one rated to 100 amps). Then each is attached to a metal bar or “leg” that runs down either side of the back of the panel. Each leg “fingers” alternatively with the other leg towards the center of the panel. So when you look at the breakers when they are installed, their contact pattern is arranged like this:

For example, an electric dryer or water heater is powered by 240 volts. This is done by placing a double breaker in the panel. Let’s say the one for your water heater takes up breaker slots #1 and #3. That means there is power being drawn from the left 120 volt leg and the right 120 volt leg. A 240 volt cable carries a wire to each heating element in the hot water heater (120 volts + 120 volts =240 volts). 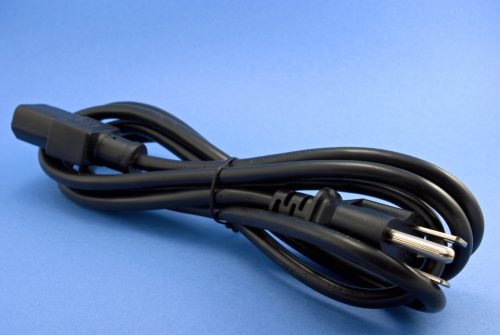 What is Ground and Why Do We Need It?

You know those round prongs on a three-prong plug? That’s the ground connector. Even though there’s normally no current traveling through the ground wire, it’s a vital part of fuse box safety. Here’s how it works:

In residential wiring, there are three wires: a black one for load (from one of the 120-volt legs), a white one which is neutral, and a bare copper wire which is ground. In your circuit breaker panel, the neutral wire from the pole connects to the neutral/ground bus bar. Though both the white wire and the ground wire from the household cable connect to this bar, they actually do different things. The white neutral wire completes the flow of electrical current, but because it’s connected to appliances and electronics, it tends to have some electrical resistance.

Ground wires, meanwhile, are connected to the metal frame of electric appliances, light fixtures, and motors, but do not carry current. In the event that the load voltage somehow contacts a metal frame (known as a “ground fault”) on an appliance and there is no ground line, you could receive a shock if you touch the appliance. According to the CDC’s report, Worker Death By Electrocution:

Consider one of their chilling examples:

"86-43 Restaurant manager electrocuted after contacting handle of refrigerator that had a ground fault. Slipped on wet, soapy floor he was cleaning."

During a fault, enough current must flow to open and interrupt the circuit. Since the ground line has the least electrical resistance, most of the fault’s voltage streams down this wire to trip open the circuit breaker. The system may only be a fraction of a second faster, but in the case of the restaurant manager, it might have been enough to save his life. 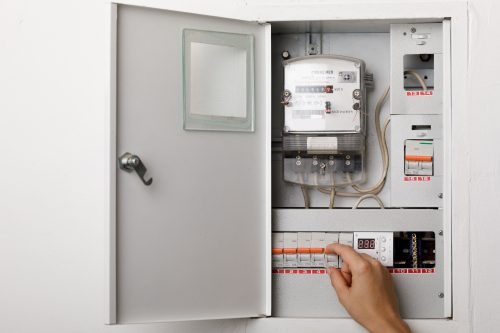 Here are some tips so you can be prepared for when a breaker trips or you want to do some work on an electrical circuit in your home: Hopefully, this introduction to your fuse box has proven helpful and potentially demystified this important component of your home’s electrical systems. 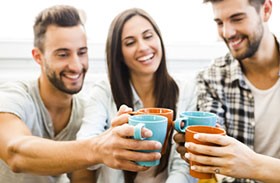